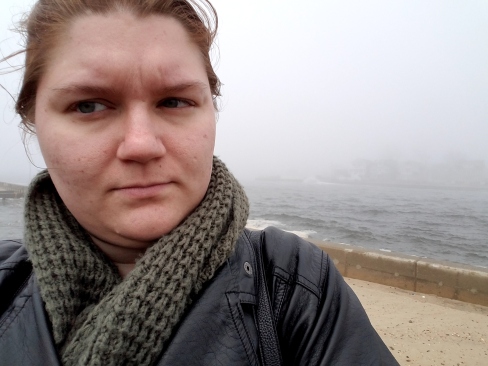 (Selfie taken on my worst mental health day of 2017. Why did I take this? I don’t recall.)

Today is apparently World Mental Health Day. It’s made me remember a conversation I had once with an ex-boyfriend. This post is coming a little late in the day here in New Jersey, but I wanted to share this anyway.

He said, “You always talk about your anxiety and depression, but I never see it.” I sensed an implied message, namely, “So, it’s not really that big a deal, is it?”

I replied, “Just because it isn’t visible, or isn’t happening around you, doesn’t mean it doesn’t exist.”

He eventually wound up ending the relationship exactly a week after Anxious Krys made her first appearance in front of him. My logical brain said it was a coincidence. My illogical brain was concerned that was at least part of the cause and wondered which other people in my life I might drive away by being a basket case. (I just want to make it clear — I’m not using illogical as a negative term here, it’s just the terminology I personally use to identify the thoughts that I know are floating around in my head because of depression and anxiety, and to separate them from my clearer thoughts.)

When it comes to my mental health issues, I make it a point to be as open as I can be with as many of the people in my life that I feel I can. Maybe I’ll never have an anxiety attack around a specific person. Maybe the most they’ll get of my lows is a text message that says, “please send me memes or a funny video because I’m down today.” But I want people in my life to know that this is a part of me that exists because if it does pop up, I don’t them to be taken aback. I know there are people out there who don’t want to be around a “crazy girl,” who wouldn’t want to be my friend because sometimes I can get “too negative,” who wouldn’t want to date me because sometimes I’m occasionally emotionally unstable. So I just feel like giving people a heads up is the polite thing to do.

My mental health issues are not even that severe when compared to those of other people. I can only imagine how much more difficult life might be for those who have struggles greater than mine.

Not everyone can be open like I am, for one reason or another. And not all mental health problems have visible manifestations. So just be kind to people, and patient with them, because you don’t know what they’re dealing with inside.