I took my last two vacation days this year right after Thanksgiving, to give myself a longer weekend, and keep me out of the office for a total of just about a week. I decided that I would spend one of those days in New York City. I live just a short 40-ish minute train ride from the city, but only go maybe once or twice a year because I don’t know my way around very well, have a slight anxiety about the potential of crime happening to me there, and while I usually have a good adventure in NYC, it’s just such an exhausting hassle. 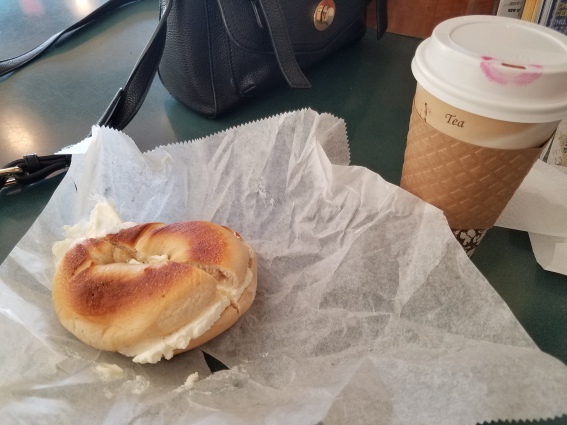 I had a doctor’s appointment in the morning, where I knew I’d also be getting blood drawn for labwork, so I didn’t have breakfast until just before catching the train. I popped into the locally owned bakery under the train tracks for a hot cocoa and a bagel. The cocoa was kind of meh, but the bagel was real and fantastic. (If you’re from out of state and ever visit me, I will take you for a real Jersey bagel, because they’re just not as good anywhere else!)

After I ate, I bought my train tickets and went up to wait on the platform. While I waited for the train, I popped in my earbuds and did not take them out until I got off the train when I came home. I usually only kept them in one ear, and didn’t play the music too loud so I could still hear things around me, but honestly, it was so nice to be in the big grey city with pleasant music playing, and it actually made for a few somewhat funny juxtapositions during the day (like Lady Gaga’s “Judas” coming on while I was looking at religious art).

My goal for the day was to explore the Metropolitan Museum of Art (aka, The Met). The last time I’d been there, and the last time I’d been in the city in general, was in late February. It was a good day, which eventually has become a bit of a painful memory. And one of the great things about my brain is that sometimes it has trouble letting go of pleasant-turned-painful memories of a place unless I’m able to sort of cover up those associations with new memories. It’s weird and kind of dumb, I know, but I’d been fixated for some time on making a trip out to The Met to do a memory replacement of that day. However, the need was not so great that I wanted to deal with weekend crowds, which is why I was devoting one of my two weekdays off to the endeavor.

I don’t understand how city buses work (although I learned this year that you can use your Metrocard on them!), so after I got off the train in the city, I rode the subway up to the Museum of Natural History and wandered through Central Park, as The Met is just on the other side of the park. Along the way I found this lake, which I think is not The Lake with the Alice in Wonderland statues and stuff, but if there’s anything I love it’s a good water feature.

I also found this beautiful tree. I love trees with bright yellow leaves like this. 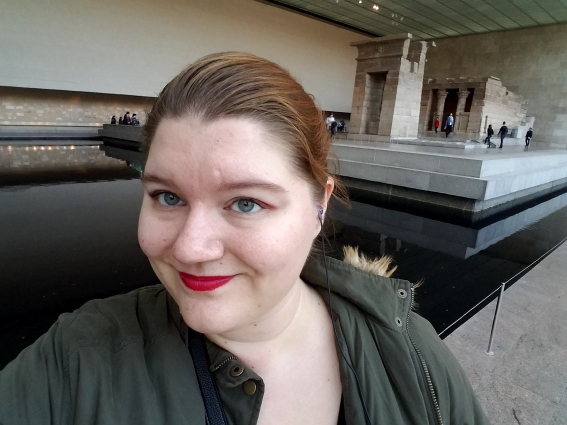 The line to get into the museum was mercifully short (where on the weekend you might wait half an hour or more). This selfie with the Temple of Dendur is my proof that I actually went on this day trip and didn’t just pull these pictures off of Google, lol. When I was at The Met in February we wound up looking only at historical artifacts and it wasn’t until we got home that I realized that we hadn’t actually looked at any paintings or anything like that, so viewing actual art was my main goal. But I still had to stop and visit the Temple.

For those unfamiliar, the Temple of Dendur is an actual ancient Egyptian structure that was brought to the museum and rebuilt brick by brick. It’s amazing to me that something like this can still exist and still look so nice! Thank god for curators.

It turned out The Met was running a big exhibition about Michelangelo’s whole life, featuring a lot of his drawings. The big showpiece for me was this one-quarter scale display of the Sistine Chapel ceiling. Around this room were little displays where you could see sketches that actually corresponded to parts of this painting.

The exhibition also featured work by Michelangelo’s teachers, students, and contemporaries. This statue wasn’t particularly well marked as to who made it, but look at that hair! That is such a beautifully detailed piece of rock! 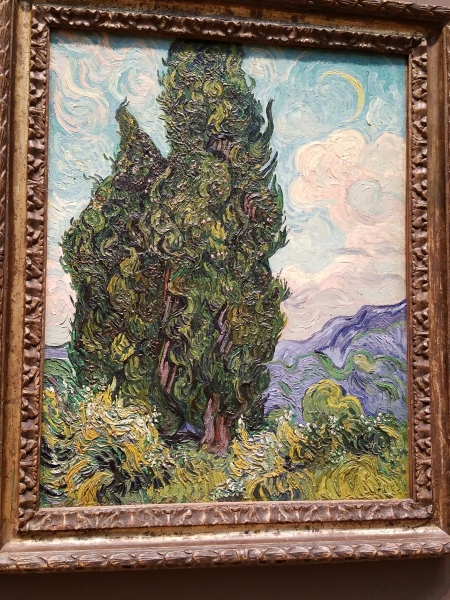 I did look at paintings as well, naturally. I saw people walking through the rooms, taking pictures of every single painting (you’re allowed as long as you don’t use flash). But this is the only picture I took. It’s a Van Gogh, and I snapped it because of the texture of the brush strokes and how they made me feel really bad and sad for Van Gogh. Poor Van Gogh.

After I left The Met, I took another walk back across Central Park, again, because I don’t understand city buses. When I’d been in the city in February, I’d spotted the top of some castle-y looking thing through the tree tops, and was curious about it, but sort of forgot until I accidentally came across it months later during a Wikipedia binge.

Welcome to Belvedere Castle. On my walk back to the subway, I followed the signage that would lead me to it, because I really wanted to see it. Belvedere Castle is an architectural thing known as a “folly,” AKA a structure built for decoration, but appearing like it might be something more grand and important. It’s really just a mostly empty building — there was a visitors’ center on the ground floor, and then VERY narrow stairs that led up to the two observation decks. (So narrow that they’re only wide enough for one person — if you’re claustrophobic this may not be an attraction for you, friends.)

The view from the Castle’s observation decks was amazing, though. Look at this picture postcard view!

My route actually accidentally took me past the famous Macy’s Herald Square. If you watch the Thanksgiving Parade as religiously as I do, you’ll recognize this street. It definitely doesn’t seem like a wide enough street for all those massive balloons, but I guess everything probably seems bigger on television. 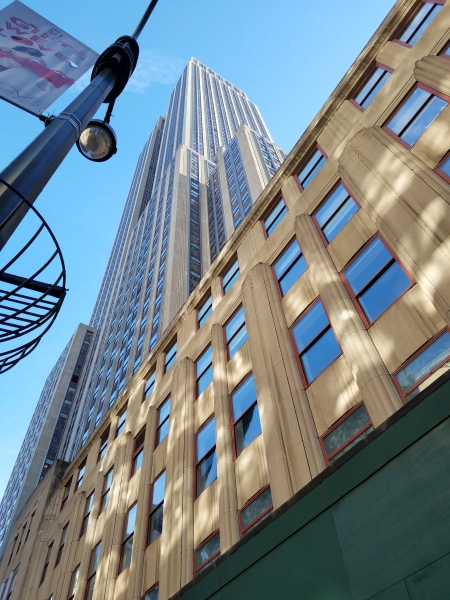 This is the Empire State Building, viewed from the base. I’ve never been up it because it costs approximately a bajillion dollars (aka, $36 for the most basic ticket package, all that just to go up a goddamn elevator, fuck that). Regardless of the price gauging, it’s a nice building to look at!

The is the Flatiron Building! Ever since I was introduced to Wagamama on trip to Boston in 2014 it’s been a place that I need to hit up when I go to visits there, because we didn’t have any down here. Until recently, that is. When I was in Boston in March, looking up the addresses on my phone, I’d noticed that they’d opened a couple of NYC locations! One is inside the door covered by that black booth on the lower right (I forgot to take a picture of the front, because I am an A+ blogger). When I was thinking about going to The Met, I knew I wanted to hit up Wagamama if it wasn’t too much of a pain to get to. 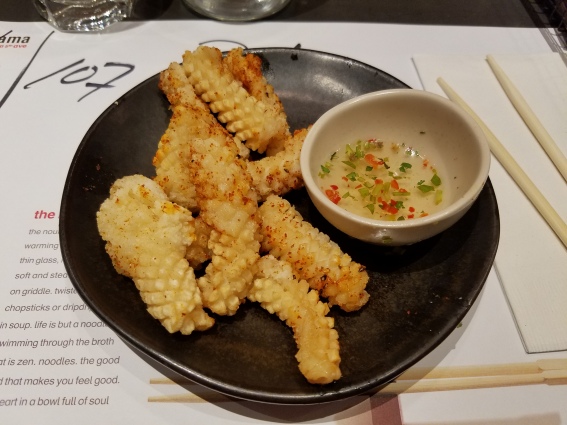 I always get the chili squid. The spice on the squid is great, and the dipping sauce has a sort of hard to describe spicy, savory, sweetness. I love this stuff! They also used to have little servings of pickled vegetables that you could order as a side (the pieces were so small I had no idea what they were), but they’re apparently discontinued? Which is a bummer, because I love the taste of Asian style pickling, definitely a way better flavor than your typical Western dill, bread-and-butter, etc.

And then I always get ramen, different kinds depending on what I feel like that day. It’s not as good as the small local place my friends and I frequent, but it’s still very tasty! And warm soup hit the spot after walking through the chilly, windy city (and also considering I was three hours overdue for lunch). This is the pork belly variety, and it was great. I need to try making the sort of semi-soft boiled egg they put in ramen, because I love the texture of it.

After eating, I hiked back to Penn Station and hopped on the next train home. My goal was to be on a train home before 5pm, so I wouldn’t be smushed in with as many commuters, and could maybe actually get a nice seat — I met that guideline by about an hour. So it was a little crowded,  but not too bad. I took this picture from inside of the train, so it’s a little blurry, but I think it’s still pretty. (If you’re one of those people that makes fun of New Jersey for being ugly, I will assume you’ve only ever been on the highways and promptly email you dozens of the photographs I’ve taken over the course of my life as a way of proving you wrong, lol.)

All in all I had a great day! Although because I went from zero physical activity to two-thousand all at once I had sore legs and hip joints for days afterward. Well worth it, though. I should figure out how to get to more places in the city, so I can go on more different adventures!