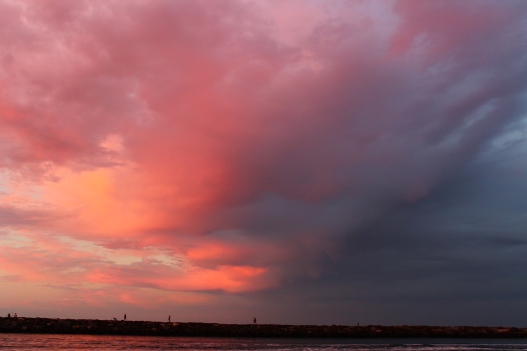 I don’t have any Valentines-related pictures, but here’s one I took in 2013 of some very pink sunset clouds down the shore.

(This blog post started its life as the last video script I ever wrote for my YouTube channel, shortly before I started blogging and accidentally stopped YouTubing. But I still enjoy this piece of writing, and it’s currently seasonally appropriate, so I polished it up a bit for the blog! Since I originally wrote this with speaking in mind, I thought it might be fun to do a little audio recording so y’all can read along audiobook style! So hit the play button below, if you’re interested!)

I can’t seem to get a man to date me for more than 4 or 5 months at a time, so you could say I have a lot of experience with getting dumped. I don’t know what it is about me that makes boys eventually decide I’m repellent, but there’s gotta be something. This isn’t something that I obsess over; after all, I currently like myself more than I ever have, flaws and all. But after 10 years or so of dating, I’ve been able to develop a pretty clear idea of exactly how I would like it to go down when someone decides they don’t want to date me anymore. So I’ve got some tips here that I’ve organized into a guide called How to Break Up With Me.

1: ACTUALLY BREAK UP WITH ME YOURSELF.
When you’ve decided you want to break up with me, just fucking do it! Don’t mess with my head to the point that I get fed up and do it myself. When I broke up with the guy I dated my freshman year of college, it was because he started saying weird things like, “oh, we should break up before summer break because I don’t want a girlfriend for my senior year, and we hardly see each other now and it’s only gonna get worse with my senior work,” but then when I would ask him if he wanted to stay together he’d say he didn’t know. Just own your feelings, or lack thereof, and do it yourself or I will call you a coward for the rest of your life. You don’t have to be afraid of confrontation with me. I’m not someone who’s gonna try to convince you to stay when you’ve got one foot out the door.

2: DON’T BREAK UP WITH ME IN PERSON.
I know, usually you hear that you should always break up with someone in person, but not me. Even if we’ve only been dating for about a month and I’m not really that attached to you yet, I -will- probably cry when you tell me you’ve decided you’re not interested because sometimes I don’t handle disappointment well, especially if I’ve been under the impression that everything is just fine. I’d prefer to not embarrass myself in public, if that’s alright with you. (There is one exception to this rule, which is that if we’ve been dating an exceptionally long time, like, say, over a year, and I’ve, you know, introduced you multiple times to all my family and friends, then you owe it to me to tell me to my face.)

3: DO BREAK UP WITH ME ON THE TELEPHONE.
If we’ve been seeing each other for, say, a month or more then telling me we’re through in a text message is simply unacceptable, especially if I have permitted you to touch my boobs. Text message breakups, or instant messenger breakups if you’re internet old like I am, are just incredibly impersonal and passive. You don’t have to deal with the fallout of what you’ve done in real time. In the past when I’ve been dumped via text, my responses have tended to come off super reasonable and tended not to convey my true emotions because that’s how texts are. Like I said, I won’t fight to keep you if you’re going, but if you’re going to do this thing that hurts me, then you deserve to hurt a little too, by hearing any raw, off the cuff reaction I have, which could range anywhere from me saying “ok ok ok” to get off the phone quickly before I start to cry to instantly breaking into massive sobs. It isn’t right for you to just shoot your message off into the void and disappear without any repercussions. It just fucking isn’t.

4: DON’T BULLSHIT ME. JUST BE HONEST.
A thing that I’ve been told multiple times when I’ve been dumped is, “you’re a great girl, I know you’ll find someone for you.” If you’re breaking up with me, don’t tell me any trite shit like that. I know I’m a cool person, and I know I’ll find someone who appreciates it enough to stay. If you really thought I was so great, you’d be staying, but you’re not, so apparently you don’t. However, do feel free to mention any character flaws you think I have, especially if they’re fixable ones, like “hey maybe reel back the sarcasm a little because you come across like a huge asshole.” And if you’ve also got any specific reason you’re dumping me, feel free to mention it. My feelings are probably already hurt just from hearing that you’re leaving me, so just lay it all out there, whatever, feel free, honesty hour.

I’m currently on a bit of a break from trying to date, because I can only handle one frustrating disheartening search right now, and job hunting definitely takes priority over the irritating fuckboys that are all over the dating apps. But if you happen to be a future partner of mine that has come across this post, now you know how to dump me when the time comes. Hell, maybe I’ll even start sending this link to boys if I sense things are starting to go south?

(What’re your opinions on this topic? And what did you think of my little audioblog concept? Lemme know — I love chatting in the comments!)