Another Anime Boston has come and gone, and seeing as how this is about the point where I really started to fall off of blogging last year, I thought it might be a good time to make an attempt at starting things up here again! I do want to do a general overview post about my experiences at the convention, but first I wanted do a bit of a “What’s in my Bag?” kind of thing. I did this as a video a long time ago on my now-defunct YouTube channel, but this year was my sixth Anime Boston (I attended 2011-12, 2015, and 2017-19), and as such I’ve really distilled down what I like to have on me during a day of running around at the convention. 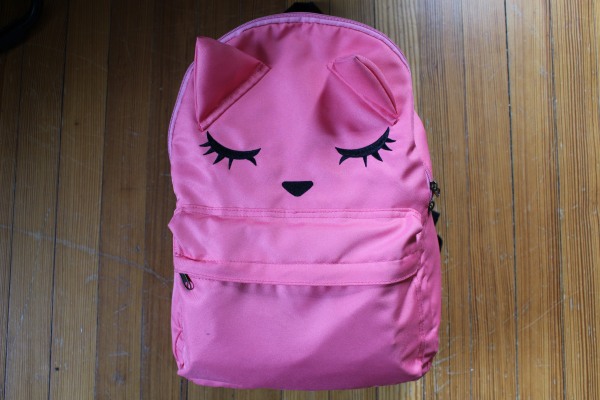 This is the bag that I bring. I bought it in the Dealers’ Room on the first day of Anime Boston 2017 when the massive cross-body purse I’d brought was causing me a lot of pain and this was the most functional thing available that didn’t have Naruto or Goku’s face on it, lol. This has been a go to day trip bag for me ever since because it’s a pretty good size and is pretty sturdy, although the back is maybe not as stiff as I would like. 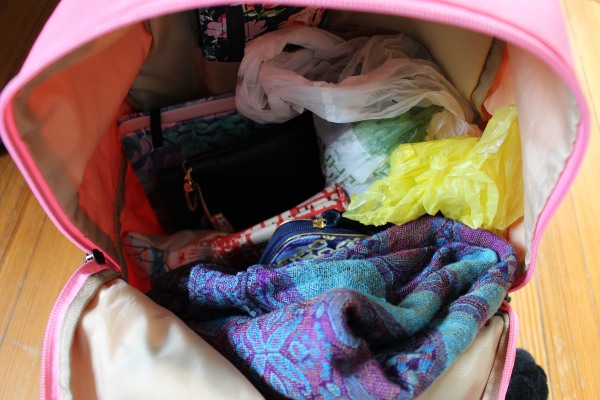 This looks like a mess, but it’s organized I swear. Firstly, there’s two small pockets at the top of the back that are the perfect size for my travel wallet and my phone or iPod to slip into for quick access. I don’t like to use the outer zipper pocket for valuables because I am paranoid about getting robbed and not being able to feel it happen. Everything else in here is either big enough to sort through easily or organized into a series of pouches. 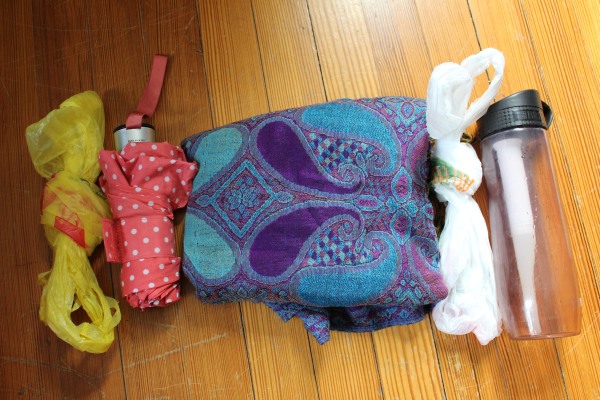 If the weather forecast is calling for rain, I always make sure to bring an umbrella, with a plastic bag to put it into when I go inside so I can put it back in my backpack without making everything wet. The scarf in the middle is large, blanket-like, and absolutely necessary — many of the panel rooms in the Hynes Convention Center are very cold for some reason. When I start to freeze, I can whip it out, but it’s easily put away when I start walking around in the main halls again. On the right is my refillable Brita filter bottle and the plastic bag that I keep it in if I carry it in a bag because it leaks if the water tilts up to the level of the cap. 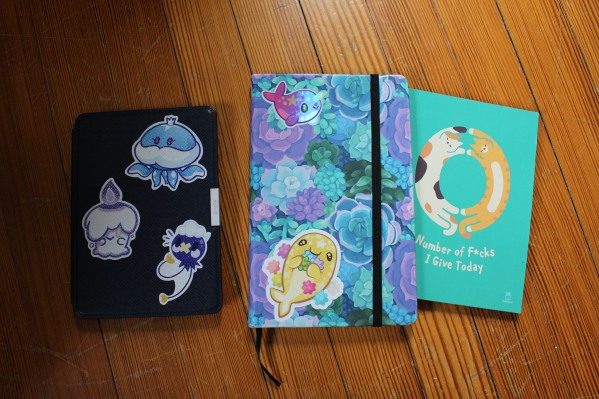 On the left here we have my Kindle, with stickers of some of my favorite ghost Pokemon on the front that were drawn by Miski (but aren’t available anymore, sorry!). My Kindle is indispensable to me in my life, whether or not I’m traveling. I can’t read on the long bus ride to Boston because I’ll get sick, but it’s great to have around for reading while waiting for the bus, during downtime between panels, or when you’re the grandma of the group who goes back to the room early to rest and waits up for all of your friends to come back so you can spend time with them. The notebook on the right was designed by Maya Kern and has stickers on it from inki-Drop’s Starwhal Kickstarter. Honestly, I only bring it to stiffen up the inside of the backpack, but it’s also proven useful for keeping my bus tickets tidy and for holding small prints, like this one that I got from Milkbun this year. (Oh how I wish I could get away with hanging this in my cubicle at work!) 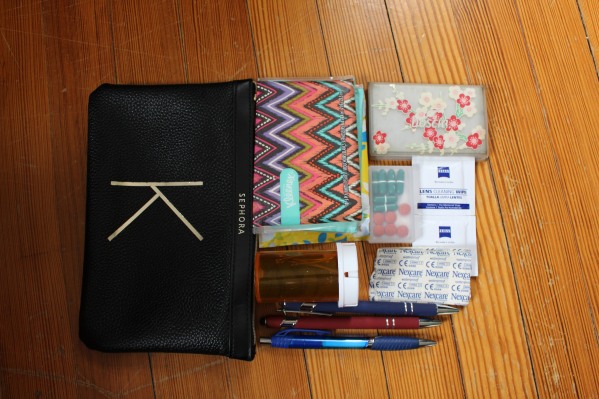 And now finally pouches! This pouch has a bunch of miscellaneous yet important things, like aspirin, hair ties and pins (in a reused orange pill bottle!), tissues, pens, a little mirror, etc.! 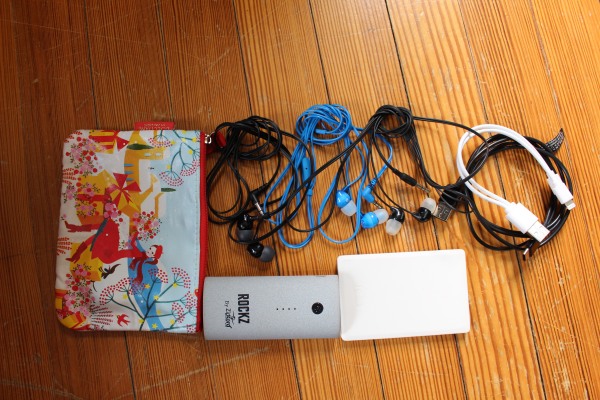 This is my technology pouch. I’ve got two portable batteries in here, the wires to connect them to my phone and iPod, and three pairs of headphones. In hindsight this is an excessive amount of headphones, especially considering I had a fourth pair hooked up to my iPod all weekend. All I can say is, one time on the bus on my way to the con I realized one of my earbuds wasn’t working. I had a spare pair with me, but they were in my suitcase in the bottom of the bus. I can only imagine that in my packing frenzy this year I went “what if that happens again, but more times?” I also don’t tend to use these batteries at all because I’m not a super phone crazy person when I have things to occupy me. So maybe next year I’ll keep one battery in this pouch and only two extra pairs of earbuds, lol. 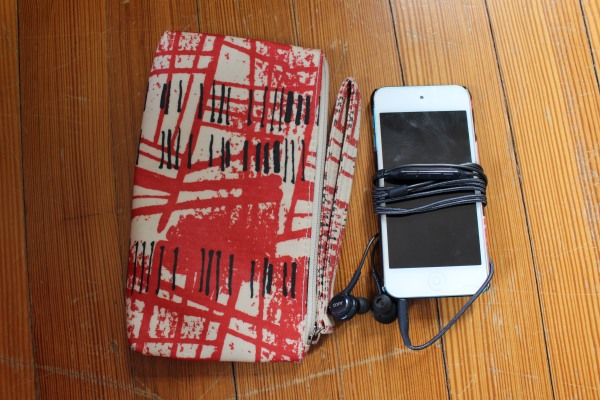 This pouch fits both my phone and iPod, but my phone mainly lived in the upper inner pocket of my backpack or the pocket of my skirt because I don’t use my iPod when I walk around the con. It mainly stays with me just so I don’t run the risk of losing it in the hotel room somehow. I always know where it is, and I absolutely need it for the bus because, as mentioned above, I can’t read on the bus so I need music to help me drown out the noises and sleep to pass the time, lol. 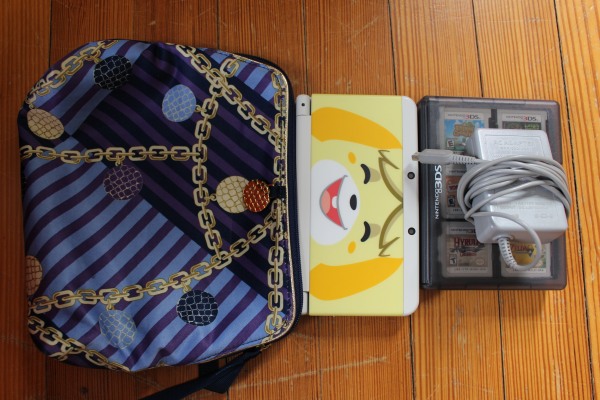 I don’t typically play my 3DS during AB, but I do collect Streetpasses. I don’t tend to try Streetpassing in my daily life because I never go anywhere, but thanks to AB over the years I’ve got a nearly complete puzzle collection and have nearly completely beaten the free Streetpass games. This year I noticed I was getting repeat Streetpasses, which was kind of exciting and interesting to me because it means those people were also at past ABs. It’s a nice little connection to other people! 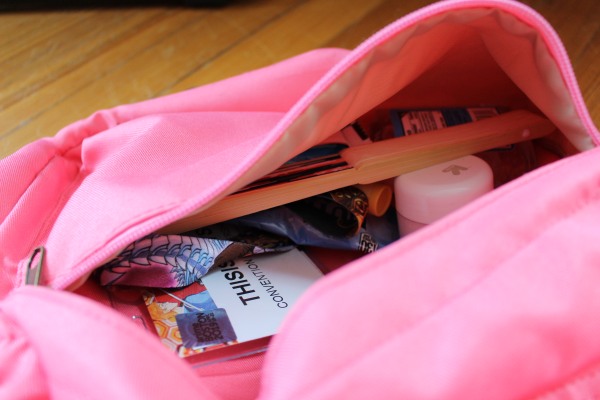 And now for the front zipper pocket of the backpack! Which actually -is- as much of a mess as it looks, lol. 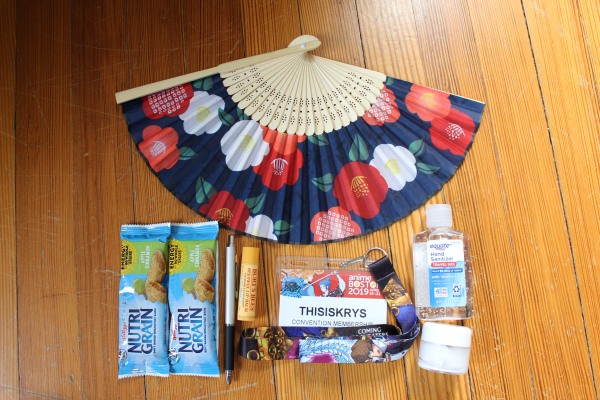 This pocket is for things I want close at hand that aren’t particularly valuable. The only thing I would really be upset about losing is that pen because it’s a really good pen! The little white pot is full of hand cream because I’ve been having a really awful dry hands problem all winter. The fan was actually a $5 impulse purchase I made on Saturday this year when I was starting to get really sweaty walking around the Dealers’ Hall, and I’d say it was well worth it — I’ll probably bring it back again next year. This pocket is where I keep my convention badge at night so I don’t misplace it, otherwise that badge is around my neck. The badge lanyards at AB are usually an advertisement for some anime company or other, but for the past few years I’ve been swapping it out for this YuGiOh one that my friend Kristen surprised me with from New York Comic Con in 2016 right before the anniversary movie came out in English because I will forever be YuGiOh trash and I want the world to know it, lol.

The only thing not in any of these pictures that I have with me every day is related to those granola bars and it is lunch. To save money on food I buy supplies for peanut butter and jelly sandwiches and make them every morning before I head out. I also get a couple of other small snacks that don’t need refrigeration, like those granola bars or little individual applesauces. When it’s time for lunch, I find a spot to sit that has good people watching (so I can admire people’s cosplays) and chow down.

So that’s all! I’ll follow this post up soon with one about things I actually did at Anime Boston, but I thought my convention survival supplies might be interesting to share in the meantime.

Until next time!
–Krys